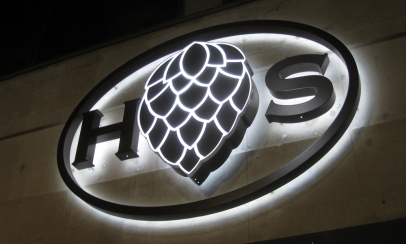 In honor of my friend’s birthday, seven friends and I decided to go to the newly opened, Hops N Scotch at 1306 Beacon Street in Brookline, MA near Coolidge Corner. I first noticed the upcoming opening of Hops N Scotch as I walked by while it was still under construction on the 4th of July. As an avid beer and scotch fan, I was excited by the name alone. After a little research, Hops N Scotch promised 80 craft beers (30 on tap) and various whiskeys ranging from scotch to bourbon and a generic whiskey category. My friends and I were eager to go and promptly made plans to visit shortly after it opened.

We got to Hops N Scotch at around 10PM and sadly suffered at the hands of the fire marshal. The bouncer at the door apologized and said that they were at capacity. Like any obnoxious bar-goers, we immediately looked through the windows and noticed that there were a bunch of open tables and that the place really was not that crowded — then we voiced that observation to the bouncer. As someone that used to bounce during college, I knew that regardless of what it looked like to the people standing outside, there was nothing to do, but wait until someone left. I suspect that as a new establishment, the fire marshal or whoever decides what the capacity of a place is, probably rounded down. Perhaps, in the future, after seeing how Hops N Scotch handles “capacity,” the fire marshal could raise the numbers of patrons allowed inside. In any event, after a few people left, we were allowed inside and seated on the first floor by the front windows next to the bar. Prime seating.

Overall, the service staff was friendly and the bar seemed clean as well as comfortable. Our server was attentive and she always made sure we had enough ice cold water. I don’t remember waiting too long for drink orders to come back to the table even though the place was pretty busy, so that’s a definite plus. The decor had a lot of deep wood tones with exposed pipes in the ceiling and while there was standing room in the center of the floor downstairs, the upstairs was mostly restaurant seating. 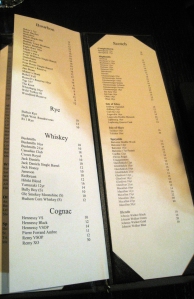 Upon sitting down at our large booth, our server came with drink menus and a printed “late night” food menu on a flat piece of paper that suggested the items changed over time. The drink menu lived up to the hype. There were indeed quite the number of craft beers and whiskeys. We ordered some beers, a couple of old fashioneds, and I ordered a Bulleit Bourbon on the rocks for myself, which I’ve had before and has always been a good choice. It’s unique characteristic is that it has a higher rye content (about 28%) than many bourbons, which gives it a distinct flavor and it weighs in at 90 proof, so it’s got a burn, but it’s still smooth.

I also tasted a friend’s old fashioned and it wasn’t bad at all. I’m personally not a fan of bitters in my drinks, which is a big time player in an old fashioned, but they didn’t use too much, so that worked for me. Instead they seemed to add in a bit more citrus flavor, which made the drink a little cloudier than usual, but it played well. 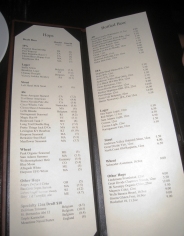 My next drink was the Hudson Corn Whiskey from the generic whiskey category. I’d never had it before and I wanted to try something new. I’d read about the Hudson Corn Whiskey in an article from Maxim Magazine naming it one of the “Six Best Unaged Whiskeys.” I wish I could say that I liked it, but the best I can say is that I drank it all. It definitely had a strong aroma that the Hudson Corn Whiskey website says smells like “corn fields at harvest.” I respectfully disagree, but it did have a sort of wilted floral earthy scent. As for the taste, it had almost no taste at all. The majority of flavor came from the smell. As an unaged whiskey it also had almost no color other than a mild tint of tan. In reality this is just fancy moonshine that won’t make you go blind. I was glad to have tried it though, but I probably wouldn’t get it again over a more traditional bourbon in the future.

Since we got to Hops N Scotch later in the evening, they only had a “Late Night” food menu available. I have to say that it was a pretty disappointing menu. Some of the items were creative though, like the fried chicken livers or the fried green tomatoes. They even tried to get weird with the grilled cheese by adding an onion jam. Most of my friends and I had just eaten Otto Pizza for dinner (amazing by the way) so we weren’t that hungry, but one friend who hadn’t eaten, tried something on the menu. She ordered the “Home Made Beer Bread.” The description was “Grilled Allagash White beer bread” with “pimento chees [sic].” Sounds great, right? 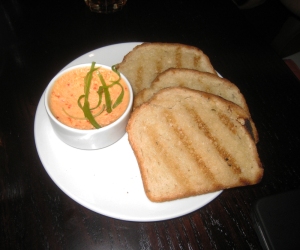 When it arrived I thought to myself, “I thought she got beer bread. That looks like toast.” Then I said it aloud. My friend graciously let me taste the bread (I’m a moocher, I know) and that’s exactly what it was – sliced bread, nicely toasted, and buttered. That’s it. I’ve had “home made beer bread” before. Most notably from Gracie’s in Providence, RI (one of the best restaurants in Providence in my opinion), which has a bread that is soft, sweet, and has a hint of beer (hence the name “beer bread”). It’s probably an understatement to say that the beer bread at Hops N Scotch was unimpressive, but let’s go with that. It’s just a shame that this was my first experience with the food here, but I’m obviously willing to give it another shot and see what they have on their main menu another day before I write off the food completely.

I would give this place another shot even though it was really the company and the drinks that made the night for me. It was comfortable and a good place to sit and joke with friends. I understand that it’s hard for new restaurants to figure out their groove and then to learn what their patrons like, so I hope Hops N Scotch lives up to what is already such a great restaurant name. I will definitely visit again.