I can’t remember how exactly, but at some point I stumbled onto a site called Mystery Meet. I know it sounds like a blind dating site, but it’s not. It’s actually a site designed to get larger groups of people in different cities together to meet one another and have dinner at a mystery location. My friend, Double Down, and I both signed up to receive email notifications of the next event in Boston and when I received my email, we both signed up.

When the first email announcement arrived, it gave hints as to the location of the dinner, but the actual place was not revealed until the day before. What you do know up front is the city location, the price of dinner (for us it was $35 which included tax and tip plus an optional $20 Whiskey “pairing”), and a brief description of the type of dinner. We were also told that Terry Lozoff of Drink Insider would be hosting the event, so thanks to him for his efforts. The hints we received regarding the location were:

Clue number 3 gave it away for me because I remembered that Jake Ivory’s closed down and it was on Lansdowne Street. A brief amount of research turned up that the Lansdowne Pub took it’s place and that confirmed my suspicions. I was skeptical at first because I absolutely cannot stand Lansdowne Street in Boston. On a weekend it is hectic, dangerously crowded, full of drunk college kids, and there is almost no affordable parking if you are foolish enough to drive there. Luckily, Mystery Meet has its dinners on Tuesday nights, so getting to this area of Boston wasn’t the hellish experience it usually is. I even found metered parking about two blocks away! 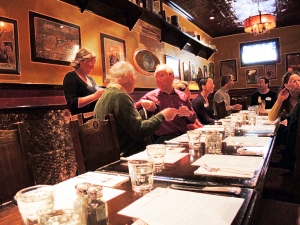 Atmosphere and Service
It’s hard to judge the atmosphere accurately because I was at the Lansdowne Pub for an event, but upon walking in, it had a very authentic Irish look with a lot of wood and dim, but not dark lighting. The main area seemed fairly large and had space for live music. That night, a lone guitarist played on the stage, which was nice because the music wasn’t too loud, but you could still hear it accompanying the evening. Frankly, I was quite surprised to find a nice place like this on Lansdowne Street, which is more famous for its club scene and Fenway Park than it is for nice Irish pubs.

The dinner was being held in one of the few side rooms that may be reserved for special gatherings. When I walked in, I saw a long table and the setup reminded me of some kind of medieval dinner where one would expect to be served mead and legs of mutton accompanied by raucous laughter from knights. It was a nice setup with a fireplace, etc., but it made it pretty difficult to talk to anyone that was seated farther than two people away. I met most of the people at my end of the table, but almost no one at all at the other end. 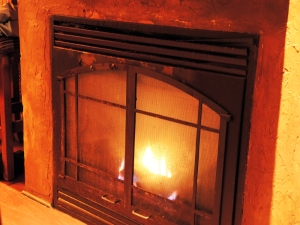 The service that night was decent although it seemed that the servers were a little jumbled regarding our orders at times. They did a great job of accommodating people with food allergies though and trying to make sure everyone was comfortable. The servers were very attentive, accommodating, and made me feel welcome.

Whiskey Flight
At the dinner, my friend and I ordered the optional Whiskey Pairing, which came as a flight of four. From left to right (below) they were Glenlivet-12 year, Dalmore 12-year, Talisker 10-year, and a lone Maker’s Mark Bourbon. Glenlivet is dry, oak-y, and a little sharp if one doesn’t have a taste for it, but it has always been one of my favorites because of its clean finish. It also went well with almost every dish that night. The Dalmore came on strong in flavor, but had almost no finish at all, which made me feel like it was thinner than it was. The Talisker was a task for me to finish. It’s not that it wasn’t good, it’s that I just haven’t developed my palette enough to like smokey, peaty scotches like Talisker, Laphroaig, and their king, Lagavulin. Talisker was lighter than other peaty scotches I’ve had, but I didn’t feel like the flavor went very well with any of the dishes. Lastly, the Maker’s Mark was smooth, sweet, and nowhere near as dry as the scotches. It’s always a great easy bourbon to sip.

While I always appreciate whiskey, one of my biggest qualms of the evening was that the dinner was advertised as a whiskey pairing. A pairing of food with alcohol usually means that a specific beverage is selected to accompany a specific item of food or dish because they complement one another. This happens often on wine tastings that are accompanied by food and some of those combinations can blow your mind! In this case there were four whiskeys and three courses. Already, that was confusing because I had no idea what whiskey was meant for what dish, nor were we offered any suggestions. In addition, the Maker’s Mark felt tacked on because it was a bourbon instead of a scotch. Ironically, the Maker’s Mark actually paired the best with the dessert. In the end, I’m not convinced that the whiskeys were selected because they complemented the meal. They were just selected. This was a whiskey tasting, not a whiskey pairing, so I was a little disappointed in that regard. It was a good concept overall though despite the execution.

First Course
As my option for the first course, I chose the Onion and Ale Soup that came with melted Irish Cheddar Cheese. This was basically, French Onion Soup, but with an Irish flair. At first glance, I didn’t know what to expect because the soup came out and had two giant croutons on it. One might think that this wasn’t a good choice, but it totally was. The beef broth, melted down the croutons and the cheese mixed right into the soup creating a kind of creamy broth. The cheese on the edges formed a delicious crust as well. Although this soup was remarkably hot, I couldn’t help eating it faster than I should and managed to burn my mouth without regret. The other people seated around me did the same thing and burned their mouths while commenting on how well done the soup was. It was an excellent start to the meal that surprised me with how good the food was at what seemed to be a common Irish pub. 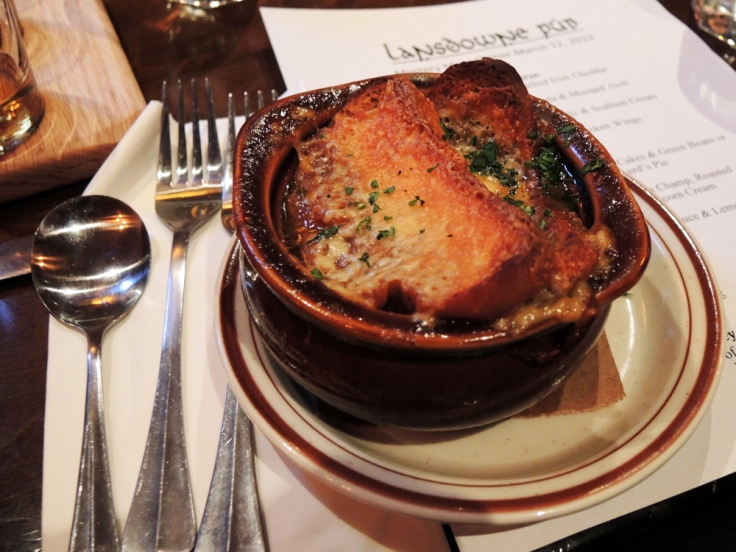 Second Course
Just by looking at the menu and seeing the the only meat option, made this an easy choice for me. I went with the Flat Iron Pepper Crust Pork that came with Scallion Champ (Irish Mashed Potatoes), Roasted Cauliflower and a Whiskey Peppercorn Cream. The pork tenderloin came out fanned over the scallion champ and topped with the sauce in a very pretty presentation. The pork was cooked thoroughly, but not dry, which was surprising. I personally found the black pepper taste a little much when just eating a piece of the pork’s edge, but it went wonderfully if I also ate it along with the champ/potatoes.

The portion size was pretty huge and although it was absolutely delicious, I couldn’t finish the whole plate if I wanted to leave room for dessert. The fish dishes that some of the other diners ate seemed skimpy in comparison to this giant pork portion. I was very pleased with this part of the meal as it continued an already delicious trend that started with the Onion and Ale soup. 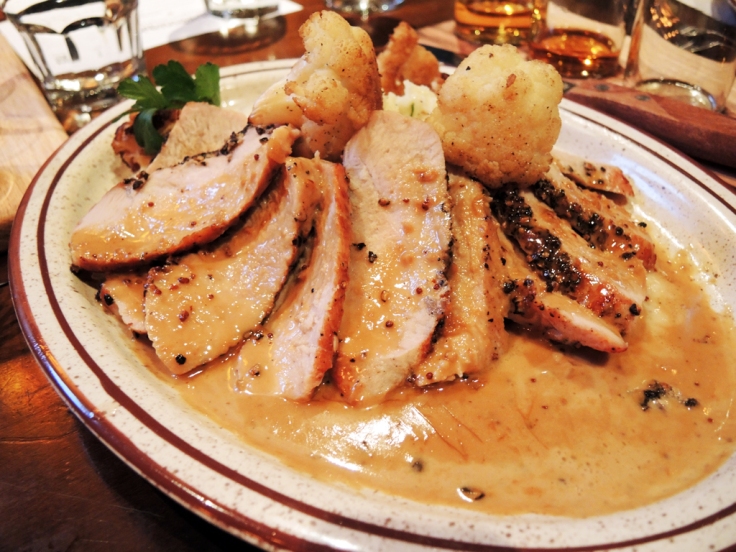 Third Course
Even though I was essentially too full for dessert, I already ordered it ahead of time as part of the 3-course meal. I ordered the Bread Pudding, which had no description on the menu, so I had no real expectations. It came out as a very large, solid piece of true bread pudding topped with fresh whipped cream and slathered with a whiskey caramel sauce. This wasn’t cake with bits of bread in it as some places make. This was truly a bread pudding. The bread pieces were identifiable so the texture was chunky, but all of the flavors were still beautifully well incorporated. The whiskey caramel sauce was so good that I had the waiter ask the chef if it was made in-house or if it was a topping they buy. The chef reported that he made it in-house, which is wonderful, but I was almost hoping that it was bottled so I could buy it myself. I should have guessed that it was homemade though because you could really taste the whiskey in it. I only finished a third of this dessert, but I would have finished all of it if I wasn’t so full already. I thought this was an especially successful homestyle dessert.

Overall Impression
I was surprised at the quality of food at Lansdowne Pub, which was much better than usual pub food. I’m not sure what The Lansdowne Pub is like on a weekend, but it was a great stop during the week. I would highly recommend taking a trip here for the food, the live music, or just for an affordable drink. It’s a shame that such a great pub is located on such an annoying street though. I will definitely be back, but probably still not on the weekend.

Rating
An Irish jam session from a land I’m dying to visit.