Seafood is generally a favorite of many and while welcome year round, it’s especially sought after during the summer months. There’s something refreshing and uplifting about enjoying the flavors of the ocean while sitting outside in the warm weather that places like Dune Brothers Seafood capitalize on.

Rhode Island and New England in general are known for their bounty of fresh seafood coveted by many around the world. Despite this, it’s shocking how often restaurants opt for frozen seafood from elsewhere or pre-made, processed fish products (like fish sticks) instead of reaching out locally to secure some of the best seafood on the planet. Dune Brothers recognizes that the best seafood is fresh, local seafood and their restaurant showcases that.

Service and Atmosphere
Located in downtown Providence among office buildings and businesses, one might not expect to find a seafood “shack” like Dune Brothers serving up fresh local seafood with outdoor seating. The restaurant itself pops with bright red paint and decorative lobster traps while the outdoor seating features umbrellas to shield patrons from the unforgiving city sun. The service is prompt, friendly, and the food comes out quickly, but still super fresh.

Food
The menu looks so good at Dune Brothers and the pictures on their social media account so tempting that it was hard not to order everything. Ultimately, I narrowed it down to trying some of their Clam Chowder, Clam Cakes, and Cape Shark Fish and Chips.

Clam Chowder – Dune brothers has one of the more interesting cups of chowder I’ve tried. It’s unique in that it’s not quite a Rhode Island Style clear broth chowder and it’s not a New England Style creamy chowder. It’s kind of somewhere in the middle. The result is a richer Rhode Island Style chowder. It’s a little celery forward, which makes it light, but the flavor is very noticeable. The absolute best part of the chowder is the incredible addition of a couple of whole clams with the shell in the cup. After having it this way, it just seems wrong that every other bowl of chowder doesn’t do the same. It’s just a great and much appreciated variation of clam flavor.

Clam Cakes – Some of the most recognizable items at most restaurants in Rhode Island serving fried seafood are clam cakes. Crispy, salty, light despite being fried in oil, and filled with clams are the signs of a great clam cake. Often, it’s hard to differentiate one good clam cake from the next, but Dune Brothers takes a stab at it by adding lemon zest to their batter. While I enjoy lemon with my seafood, the lemon zest didn’t really work for me in what was otherwise an excellent clam cake. It was even more pronounced because I’m fairly certain they add lemon zest to their homemade tartar sauce, so dipping a clam cake in it just made it that much more lemon-y. Nonetheless, for others it might just be right up their alley. With that said, it’s surely a signature flavor that I thought differentiated their clam cakes from the mass of others. 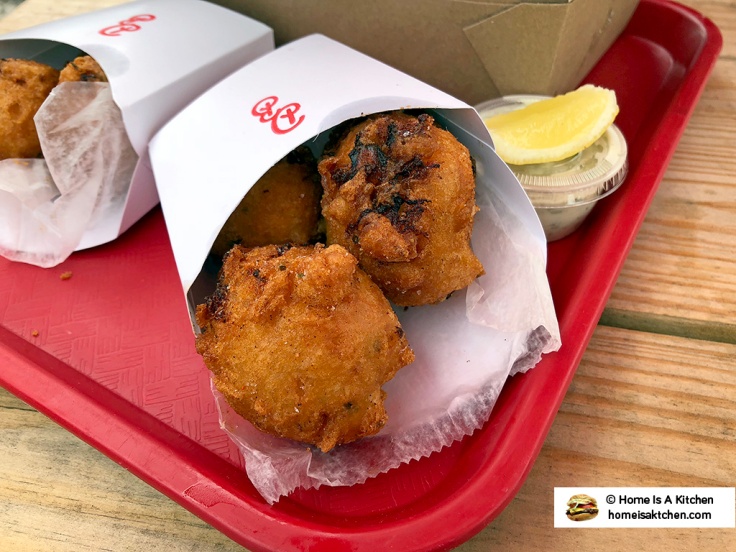 Cape Shark Fish and Chips – If I could only recommend one item from Dune Brothers, it would be the fish and chips. More specifically the Cape Shark, which also goes by the name dogfish and for some reason is considered a “trash fish” by fisherman for ages. The truth about Cape Shark is that it’s a beautiful, white fleshed, flaky fish that holds its own against the likes of cod, sole, and haddock. I loved it and Dune Brothers is smart enough to realize the value of this delicious fish. Their batter isn’t the gut busting fried mess that many of us are used to when eating average fish and chips, but is instead light, crispy, and lets the fish shine through. In this case, I thought that Dune Brothers homemade tartar sauce with lemon zest worked well with the fish. The fries (or chips) were also very nice.

Overall Impression
Dune Brothers is a great addition to the Providence seafood scene. Their use of local, fresh ingredients is exactly the type of thing that differentiates their food from the rest of the many other seafood restaurants serving fast-casual fare. The quality of their food and attention to detail is unmistakable and some of their preparations might not be for everyone, but no one would regret having a meal there. Try the fish and chips for something worth remembering and enjoy a cup of whole clam chowder while sitting outside for the full experience!

Please Support Home Is A Kitchen!

If you enjoyed this post, please support the blog by subscribing to receive updates on the latest posts.