Cibo Matto is an Italian restaurant just off of 495 in Massachusetts. Even though it’s a little off the beaten path in terms of location (i.e. it’s not in a big city), it’s easy to get to and worth the trip. At his suggestion, I met my producer friend, Joe, at the restaurant just to catch up and have a nice meal together. You can check out Joe’s 2013 production called, Uneven Strings, online. It’s a romantic comedy short that’s been accepted into the Short. Sweet. Film Fest and the American Online Film Awards. If you don’t have time to watch the whole short film, I suggest scrubbing over to 2:45 – 4:56 to see one of my favorite parts of the film, which happens to take place at a diner. 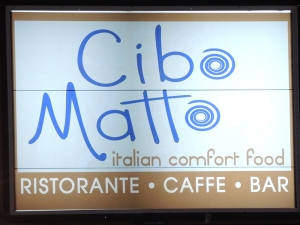 Service and Atmosphere
Cibo Matto has a traditional Americanized Italian restaurant interior, which means it has the roominess of an American restaurant, but the warmth of an Italian one. The restaurant is well lit, but not overly so and the ambience is very welcoming with an open kitchen featuring a brick oven. It looks like the kind of restaurant that says, “Yes, this is America, but the food is Italian.” Our server was very pleasant and she helped us pick out our meals after a barrage of questions from us. She didn’t even balk when my friend and I decided to take a leisurely 2.5 hour meal as we talked. 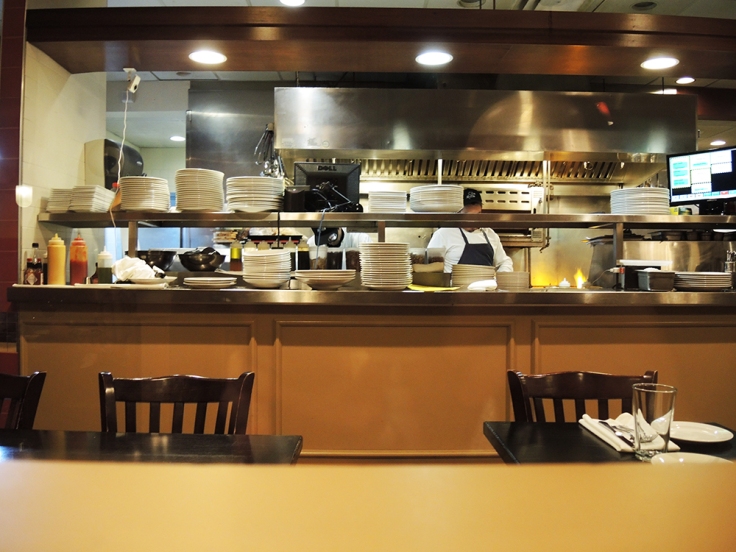 Like many Italian restaurants, a plate of olive oil and a basket of fresh bread was placed on our table. Unlike many restaurants, we were also provided with a dish split into four compartments containing salt, black pepper, red chili flakes, and dried herbs. I watched Joe as he pinched and dashed the ingredients into the oil to create a custom oil. I really enjoyed this unique approach that let us personalize what is usually a very plain start to many meals. 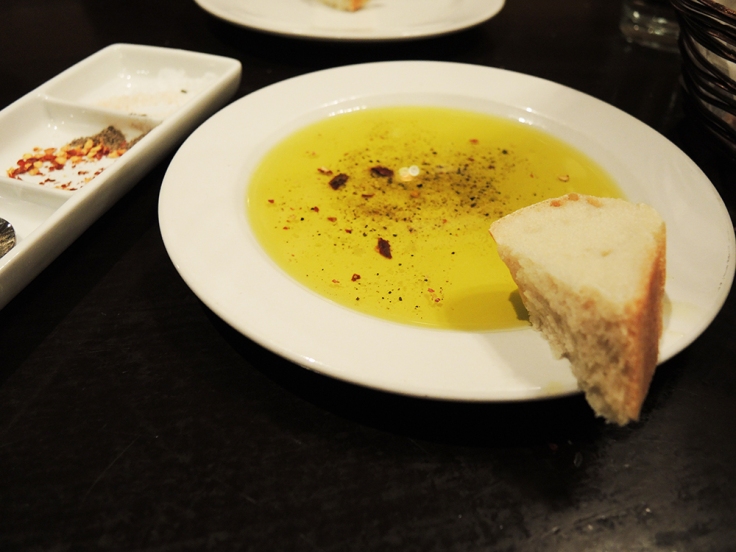 We were both ravenous and wanted to try an appetizer that would be both delicious and not too filling. We decided on an option from the Specials menu and went with the Salmon Tartare. Now I know that Cibo Matto is an Italian restaurant, but what came out to us was truly an Asian-inspired dish. The dried seaweed strips on top of the fish along with the cool avocado cubes mixed into the salmon really set off the sesame oil and soy sauce. The flavor combination was perfect although completely un-Italian. I was simultaneously impressed and confused, but that’s just my mind trying to put a restaurant into a neat box. I applaud the chefs of Cibo Matto for taking a chance and trying to incorporate the flavors of another cuisine in the process. 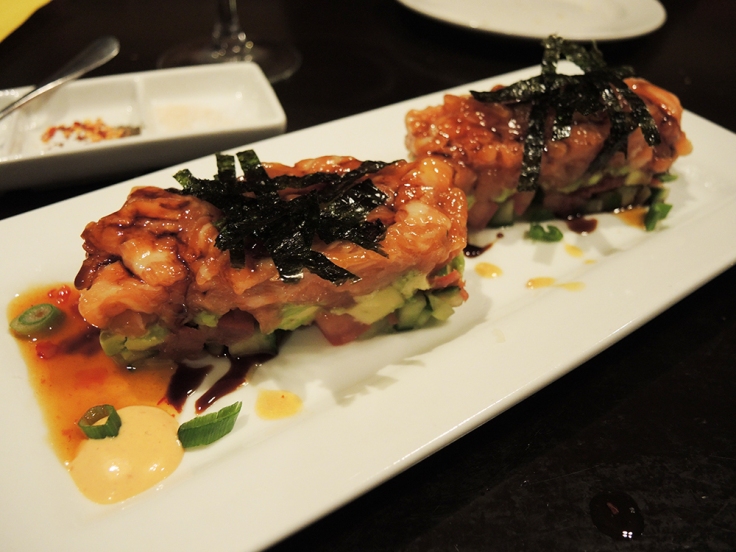 This wasn’t Joe’s first trip to Cibo Matto, so he wanted to try something different for him. He went with the apple and bacon pizza. There was something about that big brick oven in the open kitchen that had Joe seeing Pizzas that night. When it came out, it looked really good with some great color from the apples and bacon. The crust didn’t look too overcooked or undercooked. I tried a small piece of the pizza and, as expected, the flavors were complex due to the sweetness of the apple complemented by the saltiness of the bacon. Everything really worked all together and I would recommend this pizza to anyone thinking of getting one at Cibo Matto. 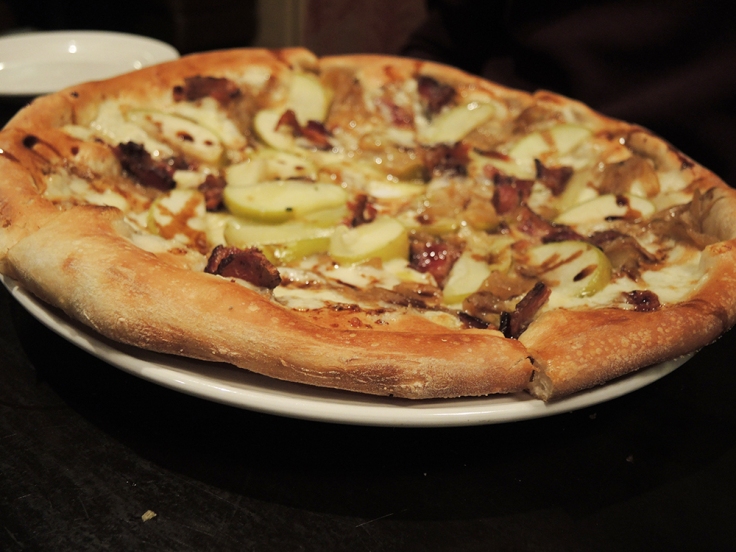 My own dinner was almost inevitable when I saw the Braised Spareribs and Gnocchi on the menu. There’s just something about braised spareribs and gnocchi that just works on so many levels. It’s essentially a higher form of meat and potatoes, but with an Italian twist. Before I ordered, however, I asked our server if instead of the sweet potato gnocchi, I could just get normal potato gnocchi since the menu also featured that kind. I know, I know… you’re probably asking, “Why would you do that?” Well, I’m just not a big fan of sweet potatoes. I know people love them, but they just don’t make sense to me. Anyway… our server said that wouldn’t be a problem and placed my order.

When my meal came out, my eyes widened because the plate looked incredible with the bone-in spareribs resting on a bed of toasted gnocchi and sauteed swiss chard. The meat was fall-apart tender with a delicious braised red wine crust topped with caramelized onions. The gnocchi’s were pillowy, included Parmesan cheese, and were slightly browned, which further changed up their texture to produce a delicious addition to the dish. The swiss chard was also really quite good although I have to admit it was a little too salty for my taste. I was more than happy with my dish and very pleased that I got the chance to try it. 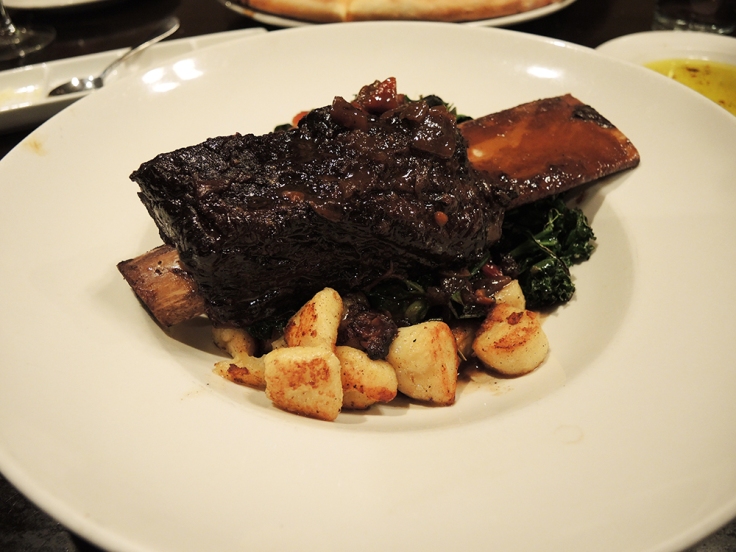 Overall Impression
This restaurant is a fantastic find in an area that a lot of people may not normally visit. If you’re going out to see the Patriots Play in Foxboro or catching a concert at the stadium, then go a little further to grab a bite at Cibo Matto for a hearty Italian meal. I very much enjoyed my experience at this restaurant and if I’m anywhere near the area, I’ll be sure to stop by again.