Everyone loves a good sausage and Chez Pascal has some good sausages. The name might throw you off into thinking that this is some puffed up self-important French restaurant, but it isn’t. The main restaurant is very nice, but inside they have a section called the “Wurst Kitchen.” My friends and I ate there to sort of celebrate my birthday, but mostly because the idea of decadent, meat filled, sausage casings was irresistible.

My first experience with Chez Pascal’s Wurst Kitchen occurred when my girlfriend dragged me to a farmer’s market and promised me a delicious sandwich in return from the Chez Pascal operated Hewtin’s Dogs truck parked outside.  The bacon-wrapped pork meatloaf sandwich did not disappoint and I did not forget it, so I was excited to try eating at the restaurant. What makes Chez Pascal different is that they make their own sausages and meat products themselves. This creates interesting flavor profiles that are unique to the restaurant that you can’t get anywhere else. 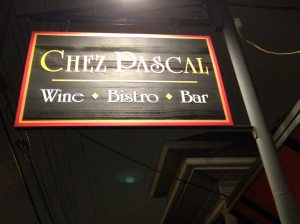 Atmosphere and Service
When we first arrived, we entered through the front door of the restaurant, which just says Chez Pascal. It’s very very dark inside (the pictures won’t do any of the food justice – sorry!) and you have to walk through the main dining room to get to the Wurst Kitchen. The Wurst Kitchen area is more like a pub with stool seating, small counters, and an open kitchen. Despite the stool style seating, it was actually a pretty comfortable setup. The only problem was that there wasn’t enough room to order a bunch of plates, share them, and eat comfortably for fear of knocking things over.

As we sat down, our waiter came over to serve us and it was immediately apparent that while he was very knowledgeable about the menu, he was also opinionated, too cool to be there, and just full of culinary judgment. When ordering a drink, my conversation with him went something like this as he leaned on the table and half closed his eyes when he spoke:

Me: Um. They both sound good, that’s why I’m having trouble deciding. Which one would you recommend?

Me: Ok…
[insert awkward moment of silence that seemed endless as I cussed out his judging tone in my mind]

Me: I’ll just have the mango one.

Did I order the manliest drink? No. Did I need an old, Providence hipster crapping on me for it? Maybe, but it was still annoying since I’m pretty sure I didn’t stumble into Dick’s Last Resort. If you need to condescendingly point out that I’m getting a cocktail, fine, but at least make a recommendation afterward, even if it’s, “I don’t recommend any of our cocktails.” Turns out the drink wasn’t anything special, but the ginger in it was a nice touch.

Moving on. At the Wurst Kitchen, you can order off of a special chalkboard-style menu mounted on the wall. The only real difference between this menu and the food truck menu is that most of the dishes served on the food truck come as a sandwich. The menu in the restaurant offers many of the same items, but most of them come as plates. 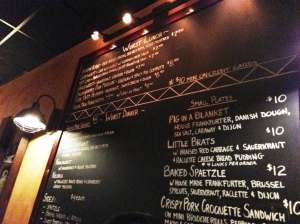 All in all, the atmosphere was nice, but I’d be surprised if they win any awards for service.

Small Plates
On principle, I’m usually against tapas and small plates. It’s not that I care about the tiny quantity of food most places give, it’s that I hate tiny quantities made from sub-par ingredients that are also inappropriately expensive. I would love to perform an experiment where any restaurant takes any entree, makes it 1/6 the size, raises the price 50%, and then calls it tapas or a small plate to see how many people would pay for it. That’s the kind of scam I believe is happening at most places.

Luckily, this was not the case at Wurst Kitchen. The food quality and portion sizes were actually just right. My friends and I decided to order one small plate and one sausage each. That way we could all sample bits and pieces of everything. We ordered the Baked Spaetzle, Little Brats, Crispy Pork Croquette Sandwich, and a Pastrami Sandwich special that they had that night.

The Little Brats were small bratwursts served over red cabbage sauerkraut and came with a cheese bread pudding. The brats were small, but tasty. Like many of the sausages that night, they had a smoother texture than I’ve come to associate with Bratwurst, so they seemed like hot dogs, but with bratwurst flavor. The red cabbage sauerkraut was alright, but perhaps a little sweet. Lastly, the cheese bread pudding tasted very good, but it was less of a mushy, cut-with-a-spoon bread pudding and more of a soft cheesy bread.

I wish I had a photo of the Baked Spaetzle. I’m not sure what happened, but I must have forgotten to take one. There is a reason for that though. It was really really good and I probably just got carried away trying to eat some because it was a table favorite! Imagine German spaetzle coated with cheese so that it was almost like a German macaroni and cheese. Then add in some sliced up frankfurters, brussels sprouts, sauerkraut on top, and you’ve got Wurst Kitchen’s Baked Spaetzle. I might not have a photo, but I would highly recommend it to anyone.

The Pork Croquette Sandwich should be plural because it comes as two sliders. This seemed like a favorite at the table when we all tasted it and I heard our smugly knowledgeable server recommend it to another party seated near us. The fried croquette inside the brioche slider was rich and hearty, but not too greasy. The flavors blended really well throughout the sandwich and we could still taste pork inside the disc-shaped croquette.  It came with a side of carrot slaw that didn’t have a lot of carrot in it, but probably would have gone really well on top of the croquette. I didn’t wait long enough to find out though. 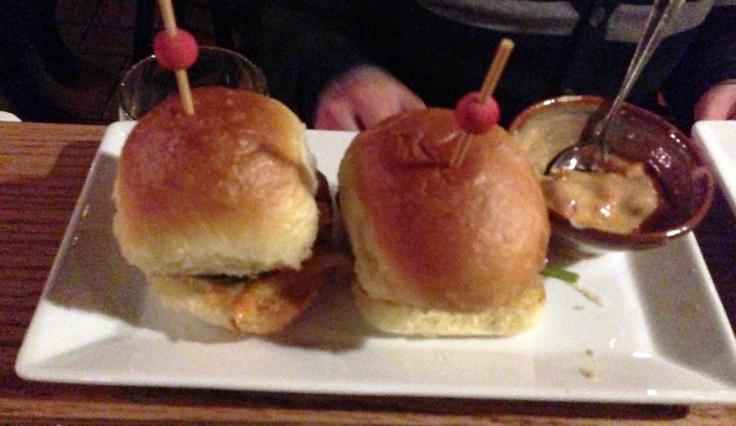 My personal favorite small plate of the night was the Pastrami Special. It came as pastrami sliders with melted cheese, caramelized onions, and served on pretzel rolls. I’m not really sure what to say about this sandwich except that everything went perfectly together. You just can’t go wrong with crusty pretzel roll buns holding the ingredients of a delicious pastrami sandwich.

We also ordered some mini baguettes for the table. They might have just been little bread rolls, but they were excellent. Crispy and oiled or buttered on the outside with a pillowy center. No matter what I dipped the mini baguette into, it tasted wonderful. 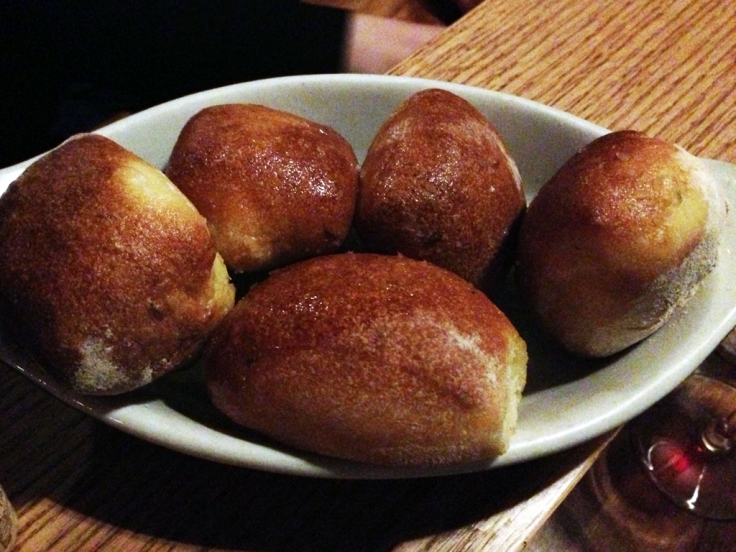 Sausages
As I mentioned, we each ordered a sausage. I only have three pictured below because two of us ordered the same sausage. We ordered the Thüringer Bratwurst, the Knackwurst, and the Kielbasa. Each came with a unique mustard and served in a special wooden plate with a long divot cut into it for the sausage.

The Thüringer came with a side of bacon braised onions and a feta apple mustard. I’m not a sausage expert, but after a little research, it seems that Thüringer sausages are often cooked on a grill with bacon grease, so the bacon braised onions were right on the money as an accompaniment. Apple, obviously goes well with bacon, so the mustard really complemented plate. Supposedly, a Thüringer sausage also has a much lower fat content than other sausages and contains marjoram, but I honestly couldn’t tell you if that was the case with Wurst Kitchen’s version. Nonetheless, it was very good.

One of my friends ended up ordering the sausage that I originally had my eye on, the Knackwurst. It came with a sweet house mustard and sauerkraut. According to some research, Knackwurst is supposed to be made up of ground veal, pork, and garlic that gets smoked after aging for a couple of days. I really wish I could tell you that I noticed all of that, but all I know is that it tasted really good and I definitely detected the garlic as well as possibly some other spices. I thought the sauerkraut was well done, but the house mustard was a little too sweet and watery for me.

Since my friend had the Knackwurst, I decided to try the Kielbasa just to give us more variety. It came with a side of coarse cranberry mustard and baked beans. I can’t say for sure, but it’s possible that the kielbasa was beef instead of pork. It had a distinct flavor that I couldn’t put my finger on that made me think it could be beef, but it very well might have been pork. As far as the smoke goes in this smoked sausage, that was the star feature here. I could taste the smoke and while it was strong, it wasn’t overpowering. I enjoyed the sausage very much, but I thought that maybe it was ground too much because the texture was maybe too velvety than I would have liked. Nonetheless, it went surprisingly well with the coarse cranberry mustard. Usually, I’m not a fan of savory cranberry, but this sweet and tart combo worked wonderfully with the kielbasa. The baked beans were average, but added to the smoky campfire feel of this sausage.

If it had been lunch time I would have tried their version of Boudin Blanc, but it wasn’t available for dinner. My friend, AmasianV, went back another day to try it and said that it tasted really good, but it didn’t have any rice in it (or if it did, it was ground up beyond recognition). Over-grinding might be Wurst Kitchen’s signature style if that’s the case.

Overall Impression
This is an easy recommendation. If you are looking for a snack and a drink or a full hearty dinner, Wurst Kitchen is worth stopping by. The menu changes a lot too, so there are probably many varieties of even a single dish. The homemade sausages and mustards allow you to change up the flavors just by changing up the combinations. Try their food truck too if you catch it around Providence (limited mobility in the winter though).

Rating
Many sausages in the face.