As part of a giveaway, I won a free sample package of Dead Rooster Co.’s Black Gold Coffee Dry Rub. Luckily this was just in time for Memorial Day weekend where I got the chance to use the rub on some ribs that I smoked using my new electric smoker. I was overall very pleased with the results and honestly very impressed with the rub. I had my reservations about the rub because it’s a self proclaimed “coffee dry rub” and my experiences with coffee based rubs haven’t been especially promising. Nonetheless, Dead Rooster Co. found a really good balance with a coffee base. The rub was definitely strong, but not overpowered by the coffee like many similar rubs.

Aroma and Ingredients:
The first thing I noticed when I opened the package of Black Gold was a powerful aroma of cumin, but immediately after that there’s an incredibly comforting smell of chocolate and coffee. There ingredients listed on the package are Ethiopian coffee, salt, pepper, garlic, cumin, cayenne pepper, and cinnamon. The ingredients I tasted immediately when I tried a pinch of the rub were the cumin, chocolate coffee, salt crystals, and cayenne pepper. The overall effect is salty, smoky, mildly sweet, and ends with a spicy finish.

Preparation:
Before using the rub, I consulted the Dead Rooster Co. website for some tips on how to use their rub properly. More specifically, I wanted to use the rub on ribs and the website indicated that “[Black Gold] blew our socks off. Like clean off,” when it came to St. Louis Style Ribs. Intrigued, I bought a rack of St. Louis Style ribs and Baby Back Ribs to try with the Black Gold Rub.

The first thing I did was trim my St. Louis Style ribs by trimming off the “flap” of meat on the back side using a sharp filet knife (in the picture below, it is the piece of meat covered in spices above the ribs). Then I removed the silver skin from the underside of the ribs to make sure the rub could permeate the meat properly. I threw away the silver skin, but I kept the piece of meat I trimmed because it’s actually good for smoking on its own.

Then I thoroughly coated the ribs on both sides and the piece of meat I trimmed with the Black Gold Dry Rub. The website says to be generous with the rub, so I applied about two heaping tablespoons to each side and patted the rub into the meat.

Next, I wrapped the meat up in plastic wrap and let it sit at room temperature for 1 hour before I was ready to use it. If you aren’t ready to cook the ribs, then you can refrigerate with the rub for 2 hours. I wouldn’t let the rub stay on the ribs for too long though because there is a ton of visible salt in the dry rub and this could draw out too much moisture from the meat if you aren’t careful. I found that one hour at room temperature was perfect.

I repeated this process for the baby back ribs (minus trimming away any meat). In one hour, the ribs will have absorbed a lot of flavors from the rub as well as release a little moisture to create a kind of paste on the outside.

After that one hour, I moved the ribs over to the smoker. I set the smoker to 230 degrees F and used apple wood chips to create the smoke. The apple wood chips are mild and faintly sweet, which is perfect for pork and especially ribs. It adds smoke without overpowering the natural flavors of the meat. In the picture below, the Black Gold dry rubbed ribs are on the bottom two racks. On the top two racks, I used my own dry rub for two other sets of ribs. 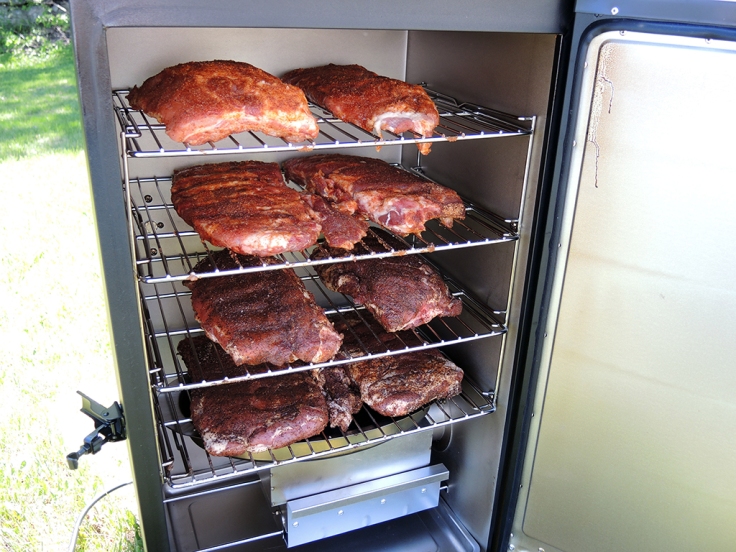 I smoked the ribs for 4.5 hours and added apple wood chips once an hour. When I opened the door to the smoker, I couldn’t believe how beautiful the ribs looked. They were tender enough to pull clean from the bone, but not falling apart so much that they couldn’t be moved. They were cooked perfectly and the rubs created a wonderful crispy bark on the outside.

The Family Review:
My family and I tasted the ribs and commented on our thoughts. For one family member, the Black Gold ribs were a little too spicy, which I could understand because there is some nice heat. Nonetheless, the majority of us really enjoyed that spiciness. We did, however, limit the toddler access to the Black Gold ribs just in case. My brother also liked the rub, but he said that he would enjoy a quarter-rack of ribs with the rub, but he didn’t think he could eat more than that before the flavors overpowered him. Another family member commented that the rub was like “a slap upside your face,” and her husband said, “I think you mean, ‘It’s so good, you’ll slap yo’ mama.'” Regardless, the verdict was that the Black Gold dry rub was bold, but really good on the St. Louis Style ribs. I can see why Dead Rooster Co. uses Black Gold on that cut of ribs because the meatiness of St. Louis ribs can stand up to the strong rub. The baby back ribs we tried were good with the Black Gold rub as well, but the strength of the rub went better with the thicker cut of ribs.

Overall Impression:
I am really impressed with the success of Dead Rooster Co.’s Black Gold. They really managed to create a truly well-balanced coffee dry rub and that is really hard to find. Most of the coffee-based dry rubs out here just taste like straight coffee grinds. That is not the case with Black Gold. Additionally, the rub creates a really excellent crust on the meat which adds texture and flavor. You can add barbecue sauce if you want, but the dry rub added so much flavor that you really didn’t need it. A little goes a long way too. I would recommend giving this rub a try for something very different, but that is also worth it.

Join 2,266 other subscribers
Follow Home Is A Kitchen on WordPress.com