German restaurants are few and far between in New England. Sure, there are a few, but compared to other cuisine types, German food is nowhere near as pervasive. I actually tried my first real German restaurant out across the country in San Francisco, CA. That was before I knew anything about what it was like to eat in a German restaurant that wasn’t a late night cart parked serving street-side bratwurst sandwiches. After trying that fantastic restaurant in San Francisco, I decided that I really enjoyed the comfort food style of a lot of German dishes. After finding out about Redlefsen’s I knew I needed to give it a shot.

Service and Atmosphere
The interior of Redlefsen’s is warm and inviting with a lot of wood tones. There is a semi-open kitchen in the back and a fireplace near the bar area. The service is friendly, willing to offer recommendations, and answers questions politely. Our food came out without a hitch and without much delay even on a busy weekend.

Food
As a starter, my friend looked at the menu and immediately announced that we must all try the Ayinger Celebrator beer, which is not only his favorite beer, but one of the most popular in Germany according to the menu. Apparently, it’s not very easy to find on tap either. It turned out to be a very good dark double bock that is sweet, but not too heavy. Perfect to accompany a hearty meal.

Kaesespaetzle – We decided to start out meal with a small pasta dish that we would share called kaesespaetzle. It’s essentially spaetzle or spätzle, which is an egg noodle shaped by hand originally, or more commonly by machine, into little shell-like shapes. The added feature of this dish was the cheese, which made the German pasta taste a bit like a bechamel-style mac and cheese. The bacon crumbles rounded out the dish to really drive home that comforting mac and cheese style. It also came with a small side salad. 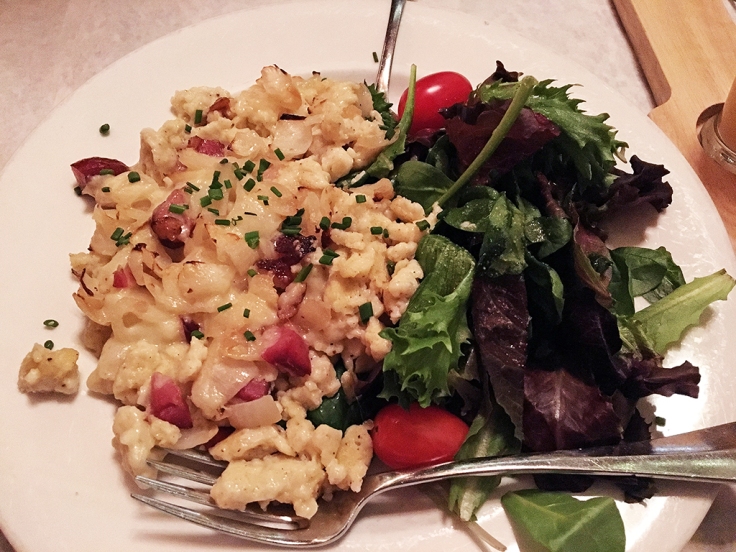 Grilled Wurst Platter – If and when I go back to Redlefsen’s I will probably get the Grilled Wurst Platter. It came with two different grilled German sausages (Bauernwurst and Bratwurst) over spatzle and accompanied by a light sauerkraut. Both, my friend as well as my wife ordered this and as far as I can tell from the little I tasted, it was excellent. The sausage was cooked properly and the accompanying mustards really helped to highlight the flavors. 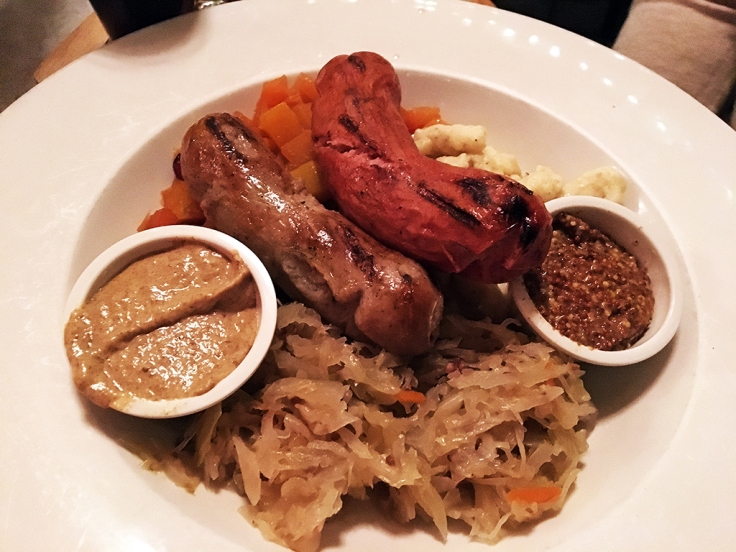 Wiener Schnitzel – In an attempt to size up Redlefsens, I ordered a standard German or Austrian dish that is found in almost any German-American restaurant – Wiener Schnitzel. It is a lightly breaded and fried thin piece of veal (or substitute with pork) often served alongside spatzle. I found this version adequate and I enjoyed the flavors, but I was a little disappointed that the breading on the veal was soggy. A really good Wiener Schnitzel should have a crispy breading, so this fell a little short in that department. The spatzle that came with the dish had an interesting combination of spices added to it, but the one I picked up on the most was nutmeg. This was a unique touch that I enjoyed and it distinguished the spatzle at Redlefsen’s from other German restaurants I’ve visited. I also liked trying the red cabbage sauerkraut because I’d never had it before, but I still think I prefer more traditional sauerkraut. Lastly, I also tried the Jaeger sauce, which is a smoky mushroom and beef gravy sauce that went extremely well with the dish.

Overall Impression
Redlefsen’s offers tasty German cuisine in a friendly environment. I would recommend a stop at Redlefsen’s for something a little different in terms of food, but that is still really comforting and familiar.