Gyro meat is one of the greatest culinary inventions and no matter how you pronounce, “Gyro” (Yee-ro, Jai-ro, Gee-ro), we’re all pretty much just saying the word, “Delicious.” While the real deal traditional stuff comprised of actual cuts of spiced meat rotating on a vertical rotisserie spit is awesome, it’s the over-processed Greek-American stuff that I’m talking about.

This commercially made ground meat comes formed into a huge cone is placed on a vertical spit where it slowly spins and crisps up on the outside. Then some lucky person gets to carve strips off revealing the less cooked interior before the whole process begins again.

I used to love doing this as a kid working church festivals. I can tell you from experience that a few of those freshly cut strips never made it to the customers, but instead found a home inside my distended Gyro-filled belly.

This glorious conical-shaped rotisserie meat is the stuff of Greek and Middle Eastern church festival legend. Many patrons of the festivals vie for position to get in the long lines just for a taste of this almost comical, yet perfectly proven way of preparing meat. The problem is that unless you find a pizza shop that also sells gyro strips (good, but not the same as the freshly sliced Gyro), most of us have to settle for having this treat only when a festival is upon us.

Not one to easily accept my lot in life, I searched for a way to replicate Gyros at home. After agonizing over the endless recipes online, I narrowed it down to two that seemed to have the most community support. The first is from the brilliant, J. Kenji López-Alt of Serious Eats fame, and the second is from the entertainment food guru, Alton Brown. I tried both recipes and followed the instructions exactly. My personal feeling is that each recipe had its strong points, but neither one completely nailed it.

Mr. López-Alt’s recipe had the correct spices and a really excellent simulation to the correct texture, but didn’t quite get the spice amounts correct. He also used bacon, which I personally feel completely changed the flavor in a way that is still delicious, but no longer true to the Gyro.

Mr. Brown’s recipe gets intricate with the use of a brick to compact the meat while cooking, but this alone doesn’t really perfect the texture and you still lose a ton of moisture by cooking in a loaf pan. While the ratio of spices to meat were probably more in the ballpark here for Alton Brown’s recipe, the spices themselves seemed completely wrong. In particular, the overwhelming use of rosemary seemed to just overrun the flavor profile. I don’t even really think there’s much rosemary in gyro meat at all, if any!

I decided to take what I learned and create my own recipe that is currently the closest I have come to nailing homemade Gyros. I use J. Kenji López-Alt’s technique for texture and flavor while utilizing Alton Brown’s heavier hand for the spices.

Unlike, the Serious Eats recipe, I do not use bacon. Instead, I recommend regular pork belly, which is not smoked, or very fresh pork fat trimmings from your butcher. This adds more fat without adding an unfamiliar flavor to the meat.

One last thing to note is that my research revealed that the commercial Gyros are full of fillers like breadcrumbs, soy, and msg. Yes, that makes them addictively mouth watering, but that also makes this recipe richer in terms of real ingredients.

In terms of assembly, if you don’t put the gyro meat into a sandwich with tzatziki sauce, then you’re missing out. I highly recommend taking the extra steps and making tzatziki cucumber yogurt sauce to accompany the meat as well as pita bread, tomatoes, and onions.

I’m very pleased with the results and I know I’ll have some delicious meals ahead with this recipe. So without further ado, here is my painstakingly researched recipe for Homemade Greek American Gyros! 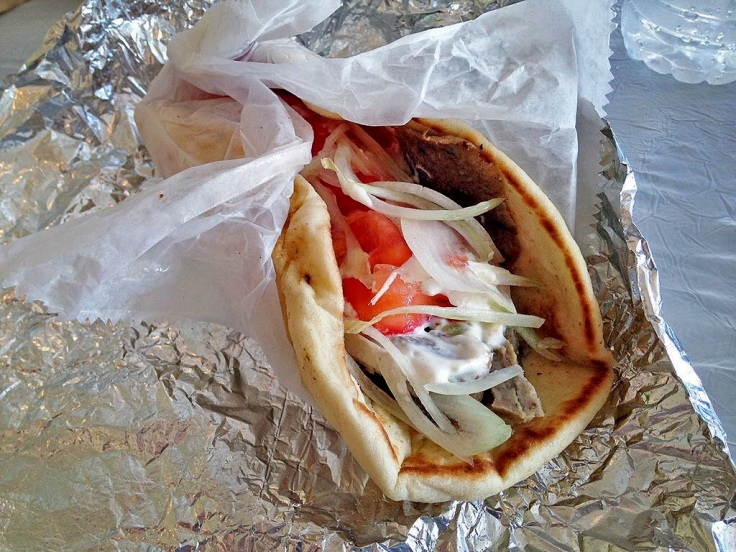 Please Support Home Is A Kitchen!